The world’s first-ever lighting product made with coloured carbon fibre is set to be launched at London’s foremost design show, designjunction (22-25 September), during the London Design Festival.

The Carbon Light, created by British lighting brand Decode in collaboration with product designer John Tree, uses a carbon fibre construction, based on technology from Formula One racing. This is wrapped in a brand new diaphanous material developed by Hypetex engineers, which permits illumination through its coloured weave. 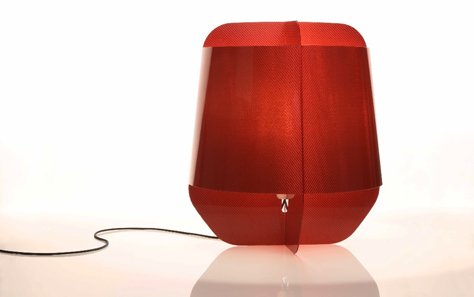 “It’s not often that a new material comes along so it was exciting to have the chance to be one of the first to play with Hypetex’s coloured carbon fibre,” said designer John Tree. “When we started to understand its characteristics, offering scale without the penalty of weight and a surface that appears alive, it seemed that lighting would be a natural area to explore its use.”

To maximise the impact of the material, Tree developed an approach using extremely thin and precise sheets of Hypetex that interlock, creating structural geometric forms allowing the light to interact with multiple surfaces. This is enhanced by the especially fine weave developed by Hypetex to allow some of the light to pass through.

“It’s rare that a product embodies the forefront of British design and engineering,” said Decode co-founder Ryan Malone. “The opportunity to work with such a wealth of expertise, some 20 years in Formula One, and apply it within a lighting context was hugely exciting.”

Marc Cohen, CEO of Hypetex, added: “This product is a perfect fit for Hypetex, as the aesthetics of the material are greatly enhanced by lighting. The strength and weight benefits also lend themselves to these stunning creations that can literally hang by a thread.” 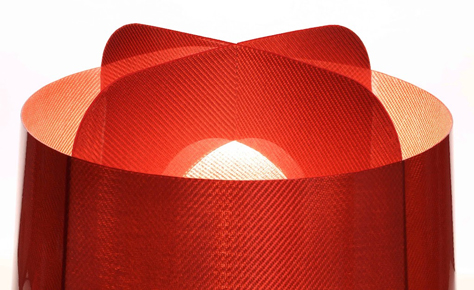 With a wide pallet of available finishes, from strong primaries to subtle whites, the Decode Carbon Light is designed to work across a broad spectrum of commercial and domestic situations. Pendant and table versions of the lights will be launched at designjunction.

Visit the Decode stand at designjunction, Stand B40 within Cubitt House.